Sulfur- and Iron-Rich Mineralogical Features Preserved in Permafrost in the Canadian High Arctic: Analogs for the Astrobiological Exploration of Mars

Elliptical sulfate-rich features, stained red by the presence of iron oxides, are set within permafrost and carbonate rock at Borup Fiord Pass in the Canadian High Arctic. These features, which vary in diameter from ∼0.5 to 3 m, exhibit the co-localization of sulfur (S) and iron (Fe) minerals, with S and Fe both preserved in multiple oxidation states. Through application of x-ray diffraction (XRD) and Raman microspectroscopy, we find that these features appear to encapsulate central cores with abundant pyrite while S0, gypsum, and iron-bearing secondary minerals such as jarosite, goethite, and hematite have formed from oxidative weathering of the pyrite. These features appear similar to terrestrial gossans, mineral features representative of weathered sulfide ores in the near-surface. We use Raman microspectroscopy and scanning transmission x-ray microscopy (STXM) to show that organic carbon is associated with the minerals within these features. The origin of this carbon remains enigmatic; however, we consider the possibility that this carbon, along with etching of the pyrite grains and accumulation of encrusted filaments detected in the features, may be indicative of preserved biological activity during alteration of the pyrite. We also consider how such geological sulfide emplacements and their weathered surface expressions may provide a target for future surface and remote sensing studies of Mars and in the search for extraterrestrial life. 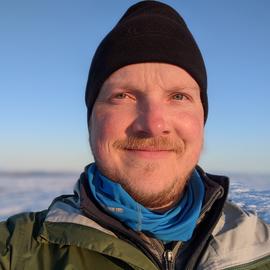